This walkthrough will show you how to create a very basic logging actor. All it needs to do is receive a “Log” message. This Log message will append a string to be logged to a text file. Note: The built in tools for working with actors have been significantly improved in LabVIEW 2015. See this document for more instructions on the LabVIEW 2015 AF Project Provider. In LabVIEW 2014 and before use . I’ll include instructions for both versions.

This article is part of the Actor Framework Basics series:

Start by creating a blank project. 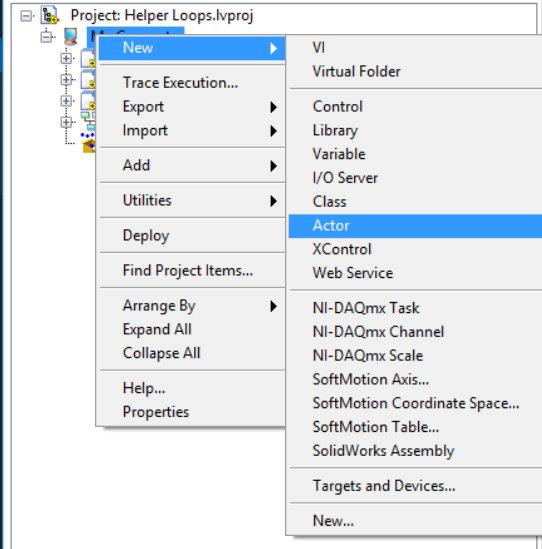 Next you’ll see the following dialog. Enter “Logger” into the “Name” Field and click OK 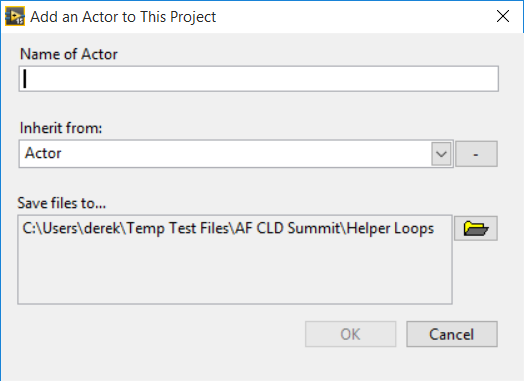 Since you’re starting from a blank project then the Actor Framework won’t be loaded into memory, so you won’t be able to inherit from it. So you’ll first need to add the framework LVLib to your project.

Next create a class and name it “Logger.lvclass”. Finally change it’s inheritance to inherit from Actor Framework.lvlib:Actor.lvclass 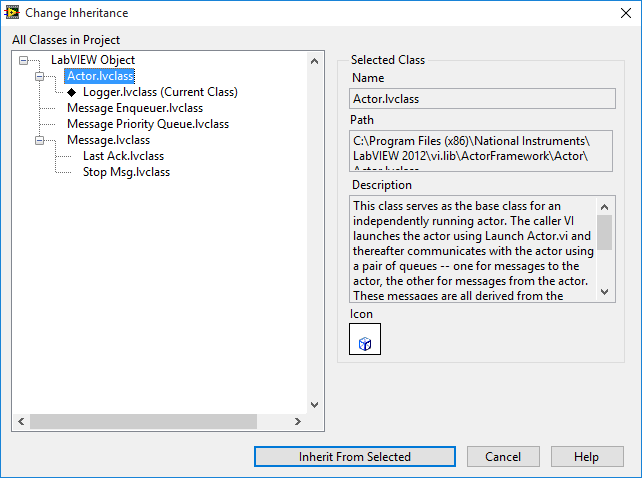 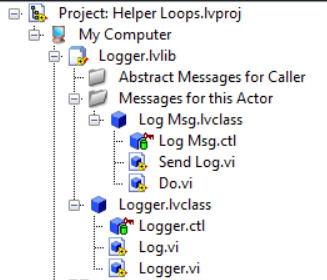 In the project: Each actor will have a handful of messages associated with it (we haven’t created any yet, but the messages are separate LabVIEW Classes). We want these message classes to be strongly coupled to our actor, so it makes sense to group them all together. To do this, create a LVLib and name it the same thing as your actor. Put your actor class inside it. Create a virtual folder inside the LVLib and name it something like “Messages” 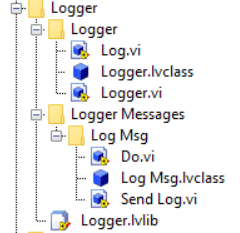 On the File System: Actors will have a bunch of class methods associated with them, and we’ll have all the message classes that are related too. This creates a decent number of files and as you’re adding/deleting/renaming things you’ll want to be consistent with file placement. First, create a folder that will contain everything related to your actor. That folder should contain:

If you’re using the right click menus and other AF tools these style guidelines will be enforced automatically.

Our actor has now been created, but it still can’t really do anything. 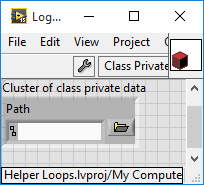 First things first: Our Logger needs to know where to log things. I’ll add a path to the actor’s private data. We’re going to need to set this log path. Since the logger NEEDS a path before it’s really useful, I like to create a “constructor” type VI to do this. Like this:

Now the preparation is done. Next we want to get our actor to do something once it’s launched. What do we know about actors?

So how do you interact with an Actor? You send it messages that will call methods on the object obviously! First, create the method in our actor class. Create a normal class static method. Give it a string input and implement the code that we want to execute when the message is received. In this case, just append the string to the path specified.

Now we need to create the message class that will call this method.

Right click on the “Log” Method in the project explorer. From the menu select Actor Framework -> Create Message.

This will cause a bunch of scripting to run in the background, you’ll see some windows appear, then disappear while it’s working.

First, go to Tool-> Actor Framework Message Maker(MGi). Using NI’s Message maker is very similar, but the result it not quite as nice. See this article for more information about 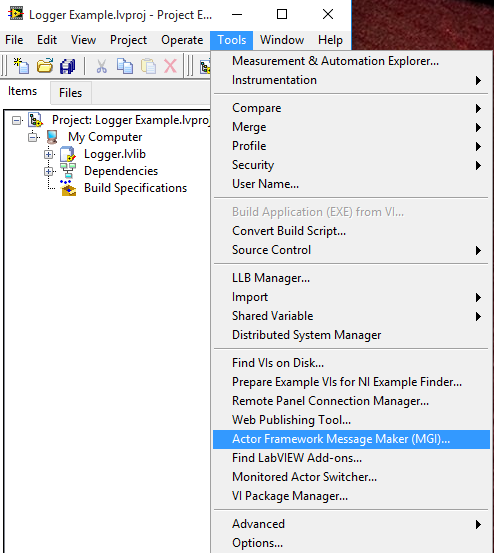 Next, select the methods that you’d like to create messages for. In this example we just want to make a message for the Log Method. 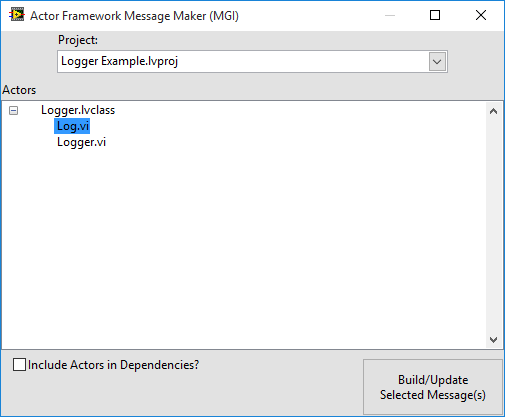 Finally, click “Build/Update Selected Message(s). Once the building is complete you can close the Message Maker window.

Now the message has been created and you should have something like this: 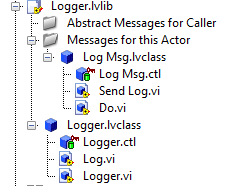 All of the scripting tools created 3 things:

So if someone wants to send my actor the log message, they just need my enqueuer, and then they can run the “Send Log” Method.

The actor’s code is already completed, so now we just need to run it. In this section we’ll just launch the actor, send it one log message, then stop the actor. Actors can launch more actors, and normally you’ll be launching a bunch of actors to form a chain or pyramid. But there’s always a first actor that you launch. This is called the root level actor. You need a plain old VI to do this. This VI’s job is just to set up everything so the actor can launch successfully. In this example, that means preparing the actor to launch (by setting its log path) then launching the actor. Next the VI will send the running actor a log message, then it will send a message that tells the actor to stop. Here’s how to do all that:

There is a VI on the Actor Framework Pallet that will launch a root level actor for us. We just need to prep the object, call “Launch Root Actor.vi” on it, then send it messages as needed.

First we need to create the Message Queue Pair. Then we need to get the Enqueuer part of the pair. Then we can call the Launch Actor VI. We don’t actually end up using the queue pair for anything with root level actors, but an actor can’t launch unless it has a valid enqueuer.

Now if we run this new VI we should see a log file appear on our desktop with “Actors Rule!” written in it. What happens if you…